West Cork Underwater Search and Rescue 2017 training roundup
Saturday, January 6th, 2018
2017 was a busy training year for the unit. Below are some of the training missions and education events we carried out last year: 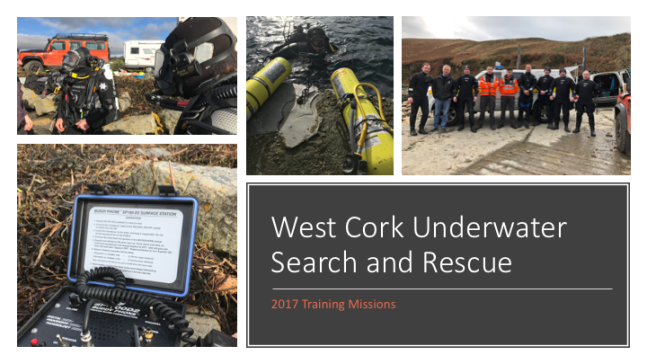 As a voluntary organisation with no state or local government funding we rely solely on donations from the public to provide our Search and Rescue service. To date we have been fortunate that people have raised funds for us and that certainly has been a big help to date. To make it easier for people we have set up an online donation webpage using Ireland’s leading online fundraising and donation service – iFundraise.

Please visit our page on www.ifundraise.ie/wcusar If you are interested in making donation to the unit. We are appreciative of any all donations to the unit!

Enniskeane Search Operations
Tuesday/Wednesday, December 22/23, 2015
The West Cork Underwater Search and Rescue unit carried out a dive operation in Enniskeane, West Cork in support of search of a missing person. Working with Civil Defence, Gardai, Coast Guard and local volunteers the team carried out a detailed assessment of the river conditions before activating the dive plan.

The team used a window of opportunity on Wednesday to activate the dive plan after the water level had dropped 2 meters. Photos below show conditions early on Tuesday. 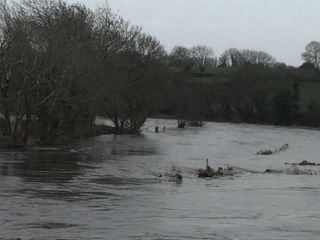 50 years diving in the Irish Navy – An illustrated talk by Martin Buckley in aid of West Cork Underwater Search and Rescue
Friday, December 18, 2015 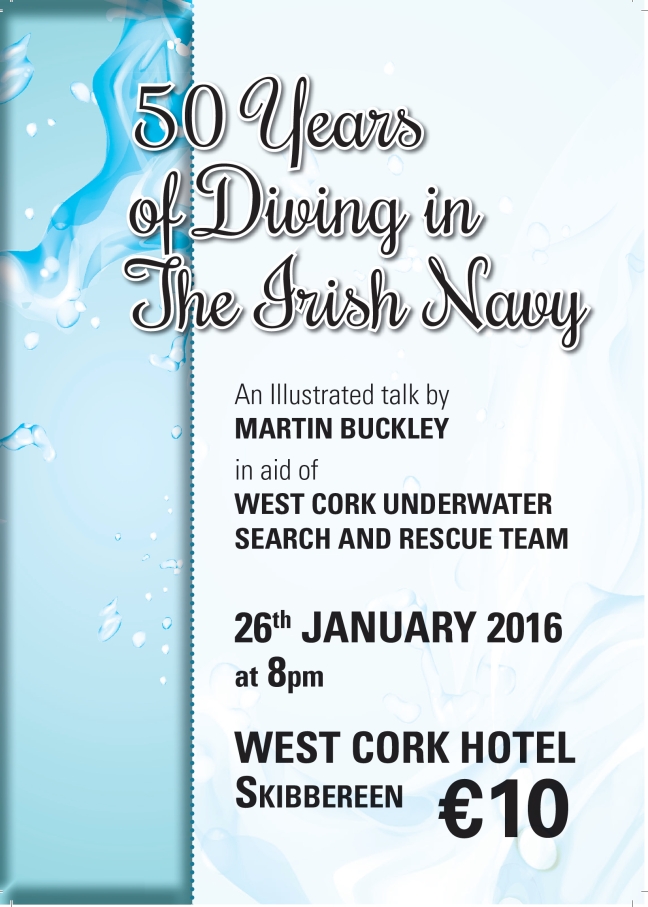 An Illustrated talk by MARTIN BUCKLEY in aid of
WEST CORK UNDERWATER SEARCH AND RESCUE (WCUSAR) TEAM. Tickets cost €10 with all the proceeds being donated to WCUSAR.Tickets may be purchased from any WCUSAR member. Alternatively you may contact the WCUSAR team at westcorkunderwatersar@gmail.com

West Cork Underwater Search and Rescue (WCUSAR) are delighted to accept a donation of €601 raised by Cork Surf Life Saver and Endurance Swimmer Nancy Edmead. Now eighteen, Nancy won the Lough Erne 17km National Championship in August in an amazing winning time of 4 hours and 4 mins! The following weekend Nancy went on to win the Irish National Open Water 10km at Coosan Point in Athlone. Now in sixth year at Castletroy College in Limerick, Nancy hails from Ballinglanna, West Cork and comes from a family of strong swimmers.

We asked Nancy how she prepared for her epic 17km swim. Her answer impressed us. “I was really worried that it was going to be cold. And it was, but I was motivated that I was doing it for a good cause”.

On accepting the donation, John Kearney, Chairman of West Cork Underwater Search and Rescue said, “Nancy is a fantastic example of a determined and community spirited young woman, and the money she raised will go a long way towards purchasing vital equipment for the WCUSAR unit”.

Thank you Nancy and we hope you take us up on the offer of a try dive next summer!

Please help us show much we appreciate the work of West Cork Underwater Search and Rescue by voting for them, in the Better Together Charity Hero awards!

Great article in today’s Evening Echo about why we do what we do.

“The way I look at things, it’s a bigger risk not to do anything,” says John. “In a situation, people look at fear and risk, but I tend to look at it in a different light. To me, it’s a bigger risk to do nothing. If we have got a skill base and it can be put to use, then use it,” he says.

Nominated in the Volunteer Ireland awards taking place tomorrow, John is keen to shift the focus off himself and onto the team at West Cork Underwater Search and Rescue (WCUSR), established in the wake of the three tragic drownings in John’s home village of Baltimore during the summer.

….
It’s a huge honour for Kearney to be named among some of Ireland’s most hard-working and committed volunteers.
“I know volunteer awards are about the person, but this one is really about the people involved and and how they have come together to do this,” he said.

The full interview can be found at the link below.

West Cork Underwater Search and Rescue team met in Baltimore recently to announce the launch of the West Cork Sub Aqua Club (WCSAC). Affiliated to the Irish Underwater Council (CFT), WCSAC aims to be a dive club for those that live and dive in West Cork. WCSAC and WCUSAR are sister organisations and we hope that some divers in West Cork Sub Aqua Club transition over to the WCUSAR unit upon completion of the necessary training. 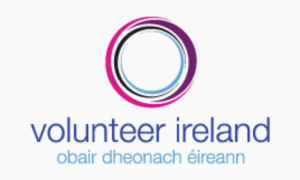 10 Category Awardees will be announced at the gala Volunteer Ireland Awards Ceremony on December 2nd at Dublin City Hall. One volunteer will also receive the Christine Buckley Volunteer of the Year Award.

The text of the nomination is as follows (http://www.volunteer.ie/events/volunteer-ireland-awards/2015-nominees/):

Most of us will remember the tragic drowning of Barry Davis-Ryan along with his girlfriend Niamh O’Connor and father Barry Ryan off the coast of Baltimore, Cork in July 2015. John Kearney was one of the dedicated volunteers who helped in the search which eventually recovered Barry’s body. While the main search was winding down, John refused to quit and called on the general public to join the search. He amassed over 100 volunteer divers and 100 support volunteers which had a huge impact on the search.

John O’Brian, who nominated John for an award, said “John has helped our family find Barry so that we could properly close out a tragic chapter in our lives. He and his team coordinated a very professional operation with risk to their own lives. He and his team are amazing people who went out of their way to help a family in distress.”

WCUSAR Vice Chairman Pat Mulcahy, WCUSAR Diving Officer Aodh O’Donnell (pictured above) and WCUSAR divers Niall McCarthy and Don Buckley were delighted to accept the donation of €3,000 from the West Cork Emergency Services and Friends Charity Cycle at the The Parkway Hotel, Dunmanway. All financial contributions are very important and deeply appreciated, regardless of the amount.

Friday, August 28, 2015
Our new website has just gone live so please drop over and have a look. Please feel free to leave us feedback on our contact page or on Facebook.

The West Cork Underwater Search and Rescue (WCUSAR) team met with the Diving Unit of the Irish Naval Service at the Headquarters of the Irish Naval Service in Haulbowline. The purpose of the meeting was to discuss search techniques, diving equipment and SAR operations. Most of the WCUSAR team attended the very informative meeting and we are looking forward to continuing our cooperation with the Navy.